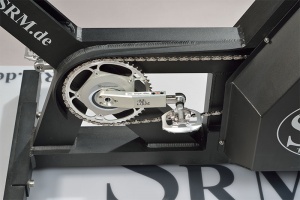 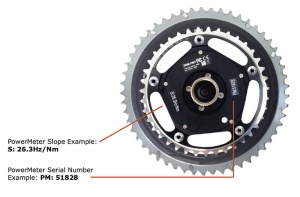 The PowerMeter is the central part of the ergometer. It is responsible for measuring the power output. The PM transmits a particular frequency (500 - 12.000 Hz) proportional to the actual torque and also a frequency proportional to the actual angular velocity via a transmitter to a receiver located on the frame. The signal is digital to eliminate transmission errors. Power supply of the PM is by a Lithium battery lasting 1800 hours.

Important: If there is no torque on the chain, the PM does not measure any frequency, which means the angular velocity is zero. Setting this zero offset correctly is important to receive the right measurement of power output.

In the factory we calibrate all SRM PowerMeters in order to determine the frequency change of PowerMeter when changing the torque on the cranks. This frequency is called slope. This slope, measured in Hz/Nm, has to be entered initially into the PowerControl. The slope only has to be reentered if a different PowerMeter is employed, which normally has also a different slope. 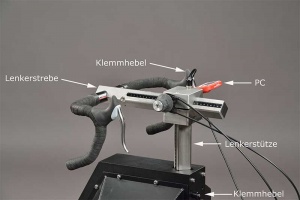 The Power Control IV, abbreviated as PC on the handlebars in the photo 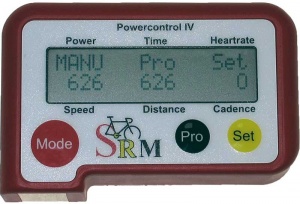 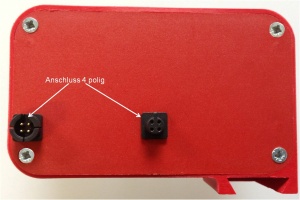 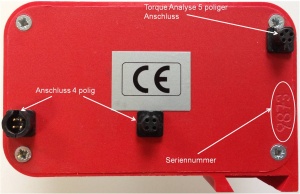 The PowerControl of the SRM Ergometer is responsible for storing the measured data, controlling the eddy current brake and transmitting signals to the computer via a serial cable.

Power output is calculated in the PC in the following manner:

Average values are calculated on the time basis of one second. Thus the power value is always displayed with a one second delay. An example: The athlete pedals with 90 rotations per minute or 1.5 rotations per sec. The calculated performance is in this case the average value during 1.5 crank rotations. To conduct this calculation the next full crank rotation has to be completed in order to know which value of the previous time basis has to be employed. Basis of performance calculations are therefore always full rotations which are calculated on the time basis (1 sec).

Power supply of the PowerControl unit is ensured via an integrated accumulator, which is constantly charged when the power supply is switched on. To employ the PowerControl on the Ergometer one has to ensure that the zero offset and slope are correctly entered. All other values such as sampling frequency, wheel size, etc. are in this case not applicable.

Since the PowerControl saves all data, the user has a second set of data which he can use e.g. if the computer has crashed or has lost its data.

Please read out the data from the PowerControl regularly and clear the memory..

In the following list you find the technical meanings of the plugs at the rear of the PowerControl. Please consider that the number of plugs can distinguish between the different model types. And please be careful in handling the plugs, because the pins inside the plugs are very sensitiv.

In the following flowchart you find the different keybord shortcuts of the PC IV: 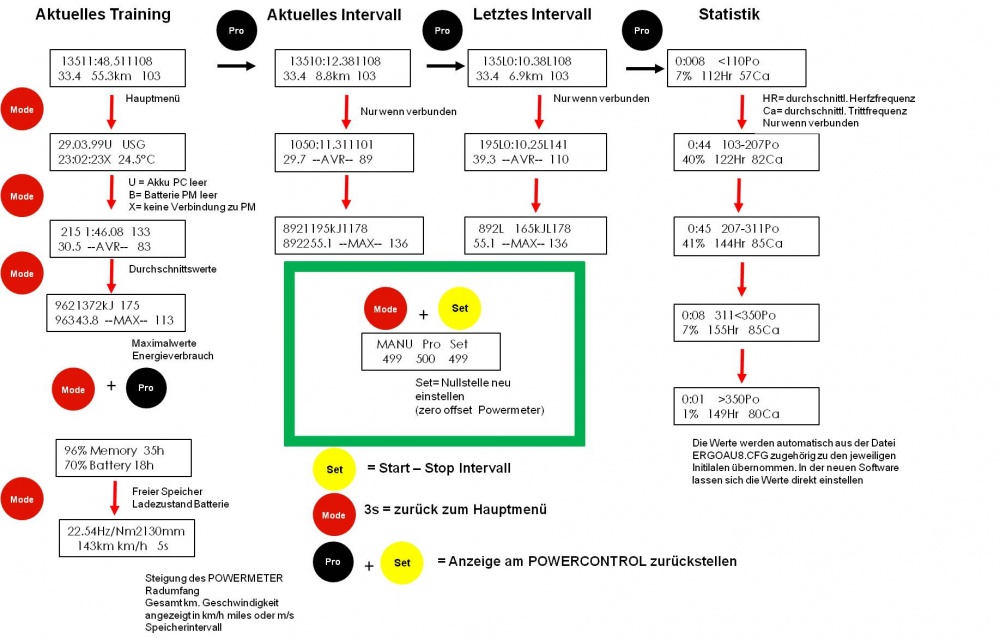 An Ethernet hub is a network hardware device for connecting multiple Ethernet devices together and making them act as a single network segment. If, for example, a notebook has only 1 Ethernet port this offers a solution. Because if you want to you use both the Ergometer and the Torque Analysis you will need 2 Ethernet ports. It is most likely is does not matter which Ethernut hub you will use but we recommend to take the Dexlan Ethernet hub because is has been tested with the SRM Ergometer. 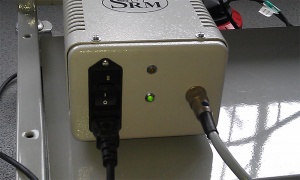 The power supply has been especially designed to suit the SRM Performance Ergometer. The power supply changes the magnetic field in the eddy current brake very rapidly to ensure a constant rotational speed in isokinetic mode. In the isokinetic mode it is necessary to reduce the braking power to near zero when the cranks are in vertical position. In horizontal position the braking power has to be up to 4000 watts. This is necessary to maintain the predetermined rotational pedaling speed. This means that at a cadence of 120 rotations per minute the magnetic field in the brake has to be established and abolished four times per second.

The power supply operates with 220 Volts, and incorporates fuses of 1.3 A. The power point which is used for the power supply has to be well earthed (grounded) in order to avoid that the athletes become electrostatically charged. WARNING: Operation of the ergometer through an unsatisfactorily earthed power point can damage the health of the athlete and the physiologist and can also lead to wrong ECG readings.

The power supply does usually not need any maintenance. Wipe with a dry cloth and be sure that no moisture gets into it.