In the following sections, you can see programmed protocols to perform several performance tests. 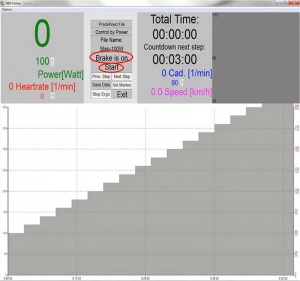 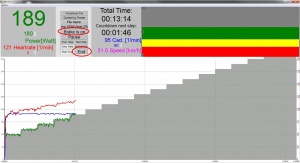 You can see two examples of an incremental hyperbolic stress test on the right hand side. The first image shows you the protocol which was programmed under the Mode tab before starting the stress test. This particular one starts at 100 W over 3 min and will be increased by 20 W every 3 min.

The second image shows you the data and guidelines during the incremental hyperbolic stress test.

The intermediate status display has the following functions:

You can increase or decrease the current guideline (power, heart rate, cadence) for the test via the arrow buttons (up / down).

If you train after cadence guideline Power or Heart rate is checked off on this level, the bars will show you the Power guideline. They help the athlete to get a better orientation and they have no influence on the regulation. 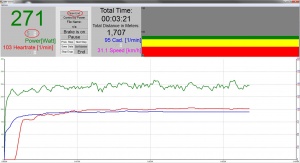 When you abruptly stop cycling after a short sprint (cadance of 0) it is possible to see some kind of plateau in the results at the power output and the cadance after the sprint. This emerges with a smoothing factor of 0%. The 2 images below provide clarification of the problem.

Those plateaus arise because of the abruptly stop of cycling. At that moment the ergometer still sends the old values for 3 seconds until it drops to 0. It is recommended to change the values ​​manually with SRMWin after saving, the last 3 seconds before a 0 cadence have to be deleted.